To download data without special tooling (e.g. git, git-annex or GIN) you can:

Download the small files and the file structure as an archive (.zip or .tar.gz). Annexed files (by default, files larger than 10 MB) will be included as pointer files (stubs) but the data will not be included. To get the content of the big files you need to download them individually from this web page.

Download the small files as a GIN archive (.gin.zip). This includes all the git information, including the history of the repository and the possibility to download the content of large files using git annex or the GIN client. 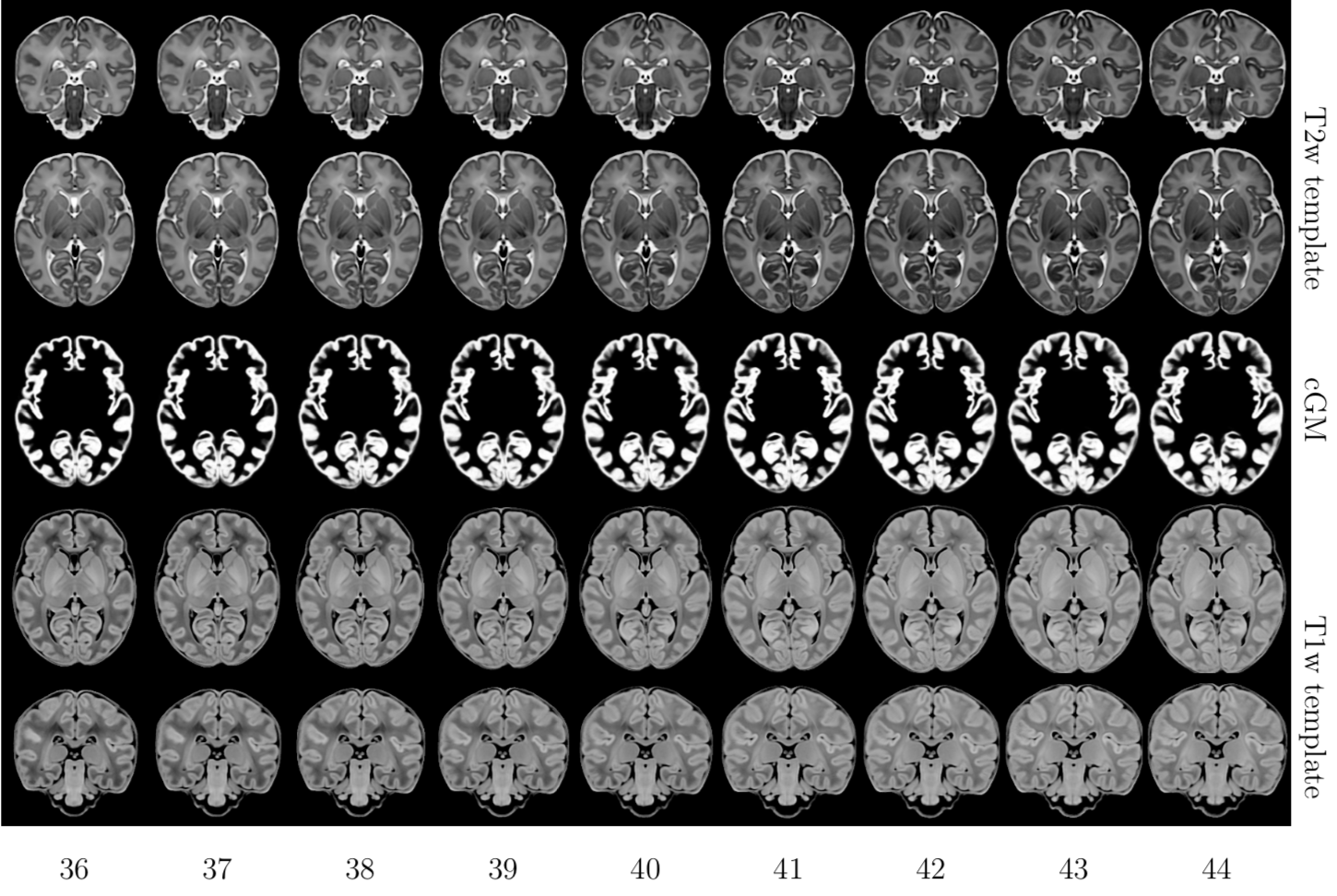 The following image files are located underneath the age-specific directories (ga_{36..44}) of the mean folder:

It should be noted that all images are in a common global reference coordinate system. Therefore, the atlas images do not reflect global differences in average brain size between different atlas time points. The regressed anisotropic scaling factors for each atlas time point are provided. These can be applied to the images of the individual time points in order to create an image sequence which includes the global changes in brain size. How this can be done using the MIRTK, see below.

Note: The posterior maps of tissue classes and brain structures may be downloaded as separate archives.

This brain atlas is distributed under the terms of the Creative Commons Attribution 4.0 International license.

T2-weighted images were obtained in two stacks of 2D slices using a Turbo Spin Echo (TSE) sequence using TR = 12 s, TE = 156 ms, SENSE factor 2.11 (axial) and 2.58 (sagittal). T1-weighted images were obtained using an Inversion Recovery TSE sequence with TR = 4.8 s, TE = 8.7 ms, SENSE factor 2.26 (axial) and 2.66 (sagittal). Images were acquired with overlapping slices at a resolution of 0.8 x 0.8 x 1.6 mm3. During motion corrected reconstruction, the images are resampled to an isotropic voxel size of 0.5 mm. Babies were imaged without sedation during natural sleep. The used images showed no structural abnormalities. Details of the image selection from in total 495 processed images are given in Schuh et al., 2018.

The histograms below show the distribution of gestational age at birth (steps) and post-menstrual age at scan (bars) of the dataset consisting of 275 T1-weighted and T2-weighted brain images used to construct this spatio-temporal brain atlas. 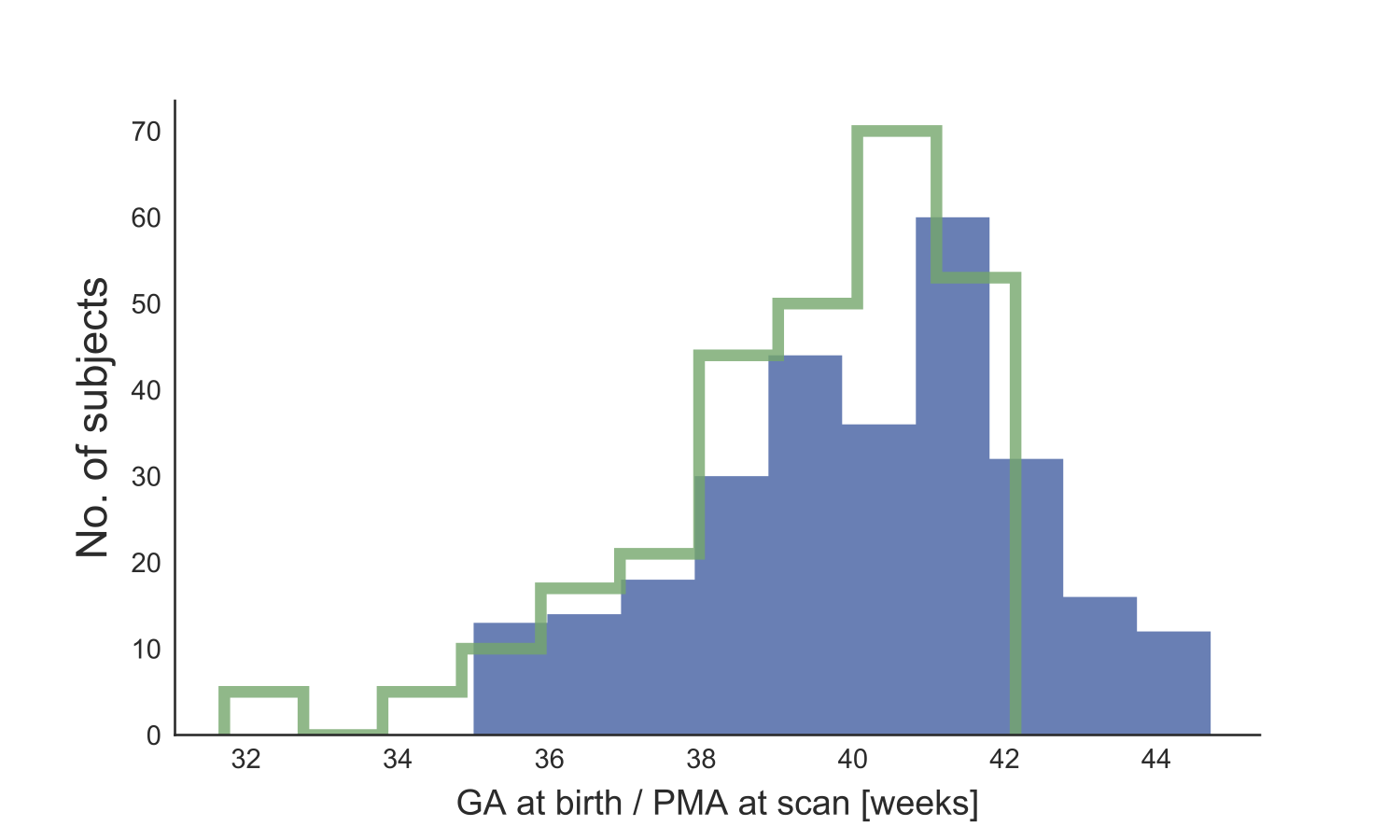 All reconstructed volumes were preprocessed using a pipeline designed for neonatal brain images, including an initial rough brain extraction and bias field correction. The images were segmented into 87 regions of interest (ROIs) and 9 tissue classes (background, CSF, cGM, dGM, WM, ventricles, cerebellum, brainstem, hippocampi and amygdalae) using an extension of the Developing Brain Region Annotation With Expectation-Maximization (Draw-EM) algorithm. A detailed description of this pipeline is given in Makropoulos et al., 2018, and the source code is available on GitHub.

The spatio-temporal neonatal brain atlas construction is summarised in Schuh et al., 2018. Further details, including an evaluation of the employed diffeomorphic registration method, can be found in Schuh, 2017.

A software implementation in Python and C++ of the methodology used to built this spatio-temporal atlas is part of the Medical Image Registration ToolKit (MIRTK), an open source image processing toolkit available on GitHub. The parameters used for this software tool can be found in the config/params.json file. Specifically, we used MIRTK v2.0.

Given an installation of MIRTK, the atlas construction can be executed using the command:

Note: This requires additional input image files which are not distributed as part of this atlas. While not publicly available as of July 2018, the used reconstructed brain images and corresponding segmentations are expected to be released by the dHCP team at https://data.developingconnectome.org/.

An image sequence which includes the regressed average changes in brain size can be created, for example from the T2-weighted template images, using the following MIRTK commands executed on a Unix system in a Bash shell, where the current working directory is assumed to be set to the top-level directory of this atlas:

The work resulting in this brain atlas was done in the Biomedical Image Analysis (BioMedIA) group at Imperial College London as part of the dHCP, which received funding from the European Research Council under the European Union's Seventh Framework Programme (FP/2007-2013) [grant no. 319456]. We are grateful to the families who generously supported this trial. The work was supported by the NIHR Biomedical Research Centers at Guy's and St Thomas' NHS Trust.